Anemone Reef is a lesser dived Phuket dive site. It’s located half way between Phuket and the Phi Phi Islands and is just a few hundred metres away from Shark Point and the King Cruiser Wreck. (The King Cruiser sank after hitting Anemone Reef).

Shark Point is bigger than Anemone reef and easier to dive in strong currents, which is why dive boats tend to favour it. But in the right conditions Anemone reef is equally, if not more beautiful than Shark Point. Local Phuket dive guides love the chance to dive Anemone reef for a change.

Anemone Reef is a submerged pinnacle so your dive starts just below the surface then descends down to about 25 metres. From depth you slowly circumnavigate the pinnacle in an upwards spiral, ending with a safety stop at the summit. Actually if you wanted to you could do the whole dive at safety stop depth. The shallow part of the reef is so pretty and so full of life. Photographers stay shallow because that’s where the best light is.

What will you see at Anemone reef?

As you would expect the rock is covered in colourful anemones that are in constant movement, swaying in the current and surge. The anemones are home to various different anemone fish species. The whole rock is matted with schools of fish like fusiliers, snapper and glass fish. These schools move in unison as if they are one giant organism.

You can find moray eels all over the reef including giant moray, white eyed moray and the less common Zebra moray. Other notables are banded sea snakes, lionfish and scorpionfish.

In the deeper sand patches you should also look for Kuhl’s stingrays and patches of garden eels.

In rock crevices hunt for ornate ghost pipefish and seahorse.

Also keep an eye out for Leopards sharks which are in the area. You have the best odds of seeing sharks if you are first in the water. Once other groups of divers hit the water someone is sure to scare them away by getting too close. 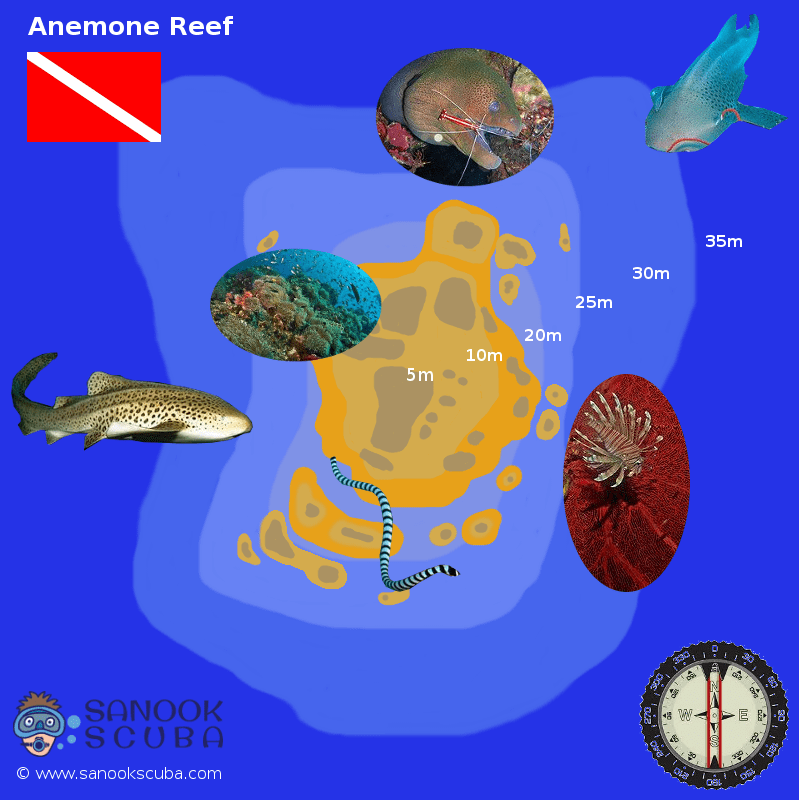