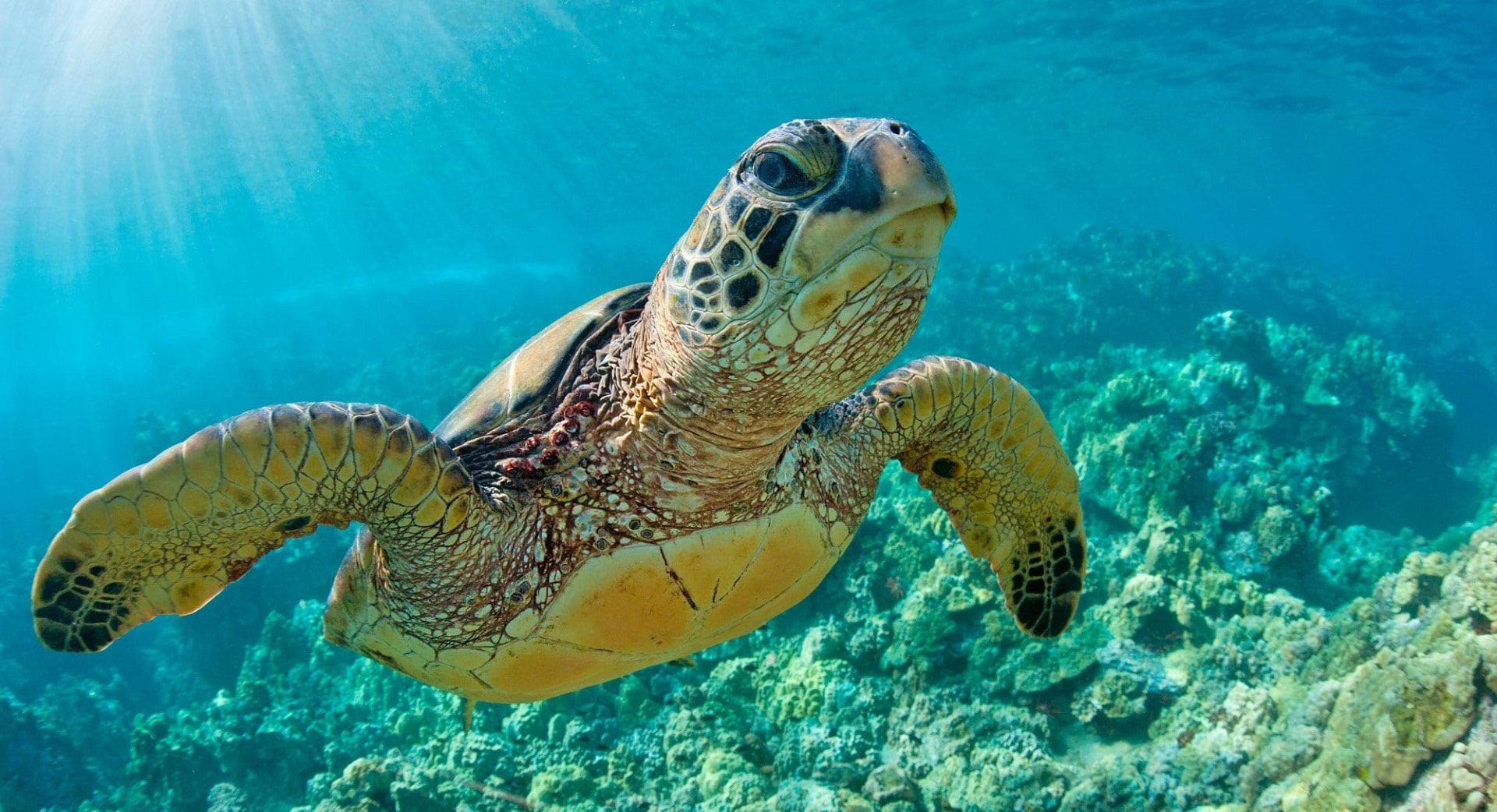 Who is this dive tour for?

0700-0745 hrs: Pick up from your hotel reception and transfer by AC minivan to Chalong.

0900-1030 hrs: Cruise to Racha Yai island. There will be a boat briefing and introductions when you board the boat. There is time for coffee and a breakfast snack, then you and your divemaster will set up and check your dive gear. That leaves time to relax on board. Sit in the shade or on the sun deck. Watch out for flying fish and dolphins.

Around 20 minutes before the boat reaches Racha Yai Island there will be a dive site briefing. The first briefing of the day is the longest as it includes the dive procedures. When the briefing is over the first group of divers will start kitting up. Divers will jump in groups to avoid crowds in the water.

1130-1300 hrs: When all divers are back on the boat a Thai food buffet lunch will be served. Lots of food tasty for everyone!

The surface interval will be one hour (at least). So time to relax, check the fish ID books, or go for a swim. No need to change your tanks, the crew will fill them with the on board compressor.

1400-1530 hrs: When all divers are accounted for after dive 2 the boat starts the cruise back to Phuket. If you have rental gear your dive master will take care of it for you. If you have your own gear you can rinse it with the fresh water showers and let it dry in the sun.

About 10 minutes before arrival at the pier the tour leader will ask that all guests pack their gear and check that they have all their belongings. A tip box will also appear so you can leave something for the boat boys.

1530-1630 hrs: Once back at the pier you will transferred back to your hotel. See you again soon!

*itineraries are subject to change at the discretion of the captain and tour leader and dependent on weather/tide conditions.

Racha Yai (sometimes spelled Raya) is a popular dive site about 90 minutes by dive boat south of Phuket. The hard coral fringing reefs offer easy diving for any level of diver. Reefs start just bellow the surface and descend to the sandy bottom at around 30 metres.

There are several dive sites to choose from and the dive boat leader will select the most appropriate dive site on the day based on weather conditions, tides and the level of divers on board.

Because there are reefs on both sides of the island Racha Yai can be dived all year round.

Racha Yai is a popular dive site for open water training dives. Student divers and certified divers will be separated into different groups. 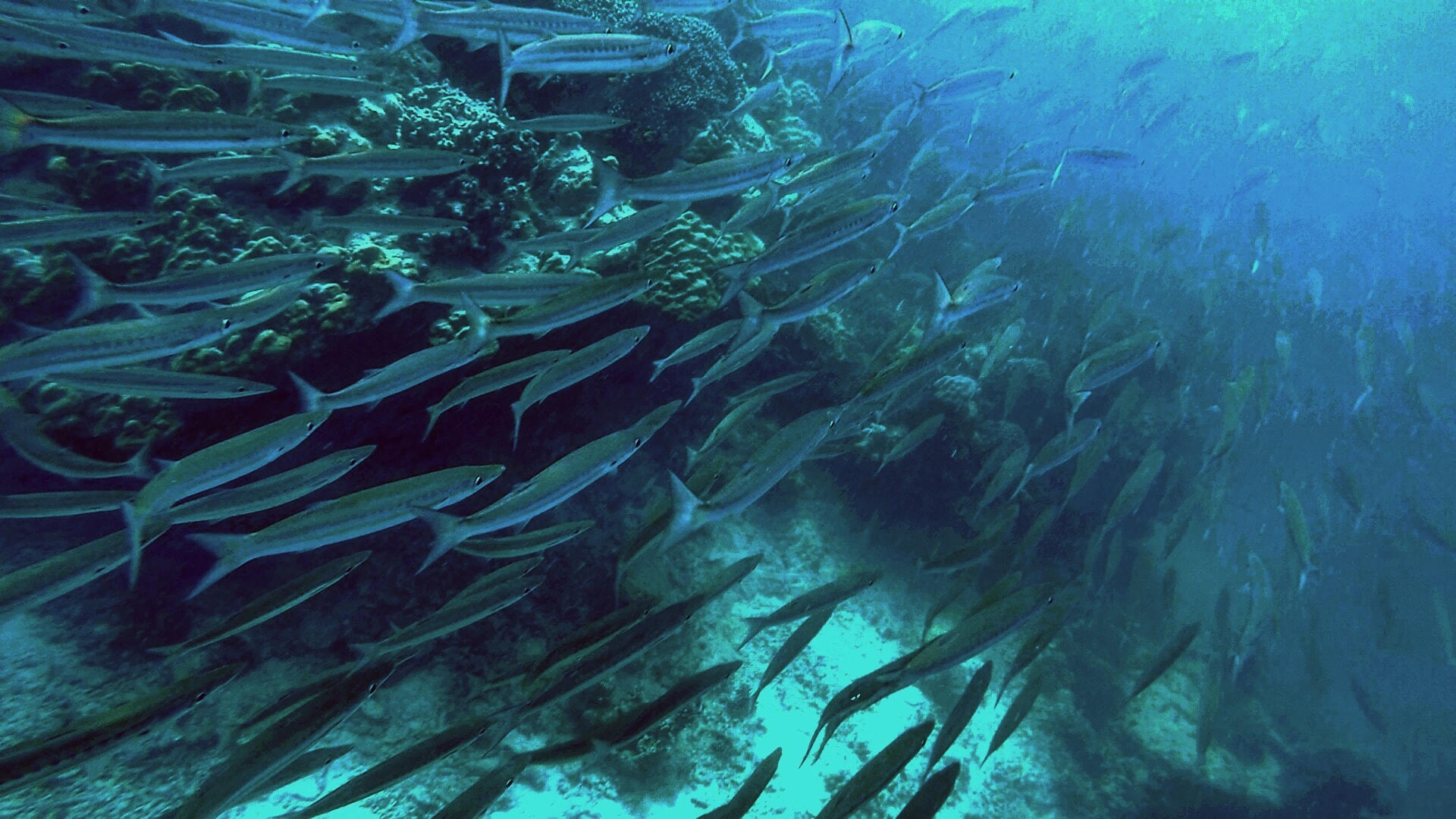 Bungalow bay. All the dive boats call this pretty bay on the north west of Racha Yai “Bungalow bay” because when dive boats first started bringing divers here there were just a few bamboo bungalows on the rocks. The actual name is Patok bay and there days the bay is dominated by the luxury Racha Resort. It’s also very popular with day tripping snorkelers who arrive in their hundreds by speedboat from Phuket.

The reefs on either side of the bay have sloping hard coral reefs. They are not the most colourful reefs in Thailand but they are home top plenty of marine life including some fantastic critters like ornate ghost pipefish, frogfish and stonefish.

Maximum dive depth is about 25 metres.

Because of it’s west coast location Bungalow bay is typically dived from November to May.

Bay 1 and Bay 2 on the north east coast of Racha Yai are the most commonly dived reefs around Racha Yai. Good visibility and gently currents make for relaxing dives. You can see all the usual tropical reef fish here. Look out for blue spotted stingrays hiding in the sand at depth. Impressive schools of yellow tail barracuda are also seen.

Octopus are pretty common and with lucky a turtle. Plus giant morays, parrot fish, grouper, longtoms and much more. On rare occasions manta rays make a visit, but your stars need to be aligned for that. 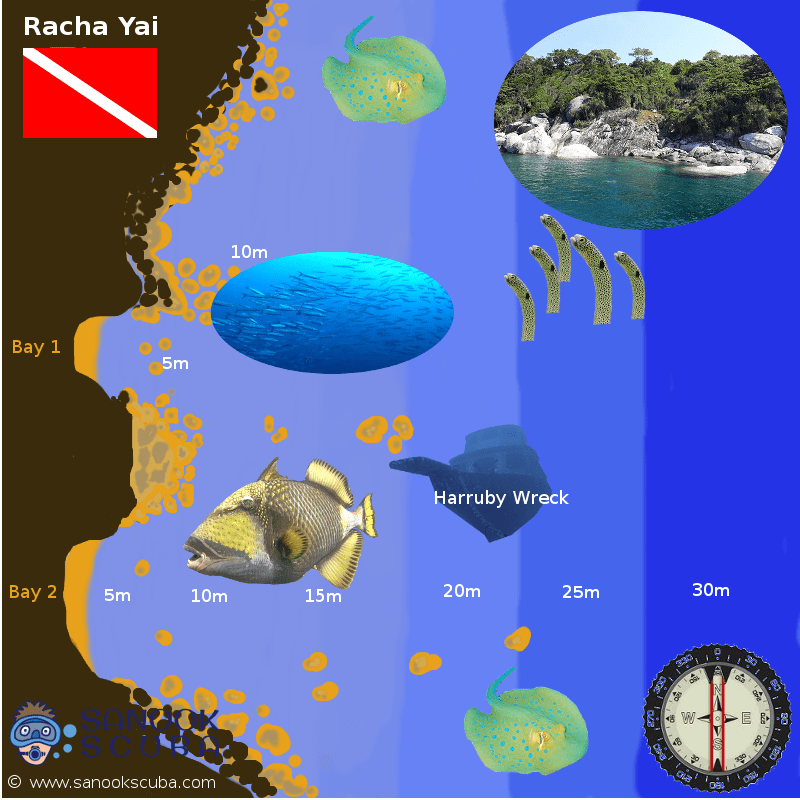 Bay 3 is also called Lucy’s reef. It’s an east coast reef about half way down the east side of Racha Yai and is one of the best dive sites on the island. It’s usually dived from May to October when it provides shelter from the south west wind.

All the usual stuff that Phuket divers take for granted is here. Like snapper and fusilier and barracuda. Trumpet fish, Parrot fish, Bannerfish, Moorish idols. Stonefish, Scorpionfish, Lionfish. In the sand look for stingrays and garden eels, flounder and pipefish.

Lucky divers may see an eagle ray or manta ray passing through.

The Cubes. At about 20 metres depth in the sand near Lucy’s reef is an artficial reef project of concrete cubes. Time will tell if they are successful in attracting coral growth, at the moment they are best for testing your buoyancy skills. They also stop fishermen dragging nets.

Staghorn Reef stretches from Bay 2 to Bay 3 and is typically dived in one direction with the current. The dive boat drops divers at one end and collects them at the other, so no finning against a current. This hard coral reef is mostly staghorn (elkhorn) coral but it was devastated by coral bleaching in 2010 and is still trying to recover. The coral is a sad sight to see but there are still some gems to be found. The Titan Trigger fish can be feisty here.

Maximum depth is 25 metres at the bottom of the reef.

Bays 4 and 5. These bays further south on the east coast of Racha Yai are less often dived because conditions need to be right. Currents can be a bit stronger here and if a diver surfaces in the wrong area they can soon drift south away from the island. It’s possible to find a bit more depth here as you head south. 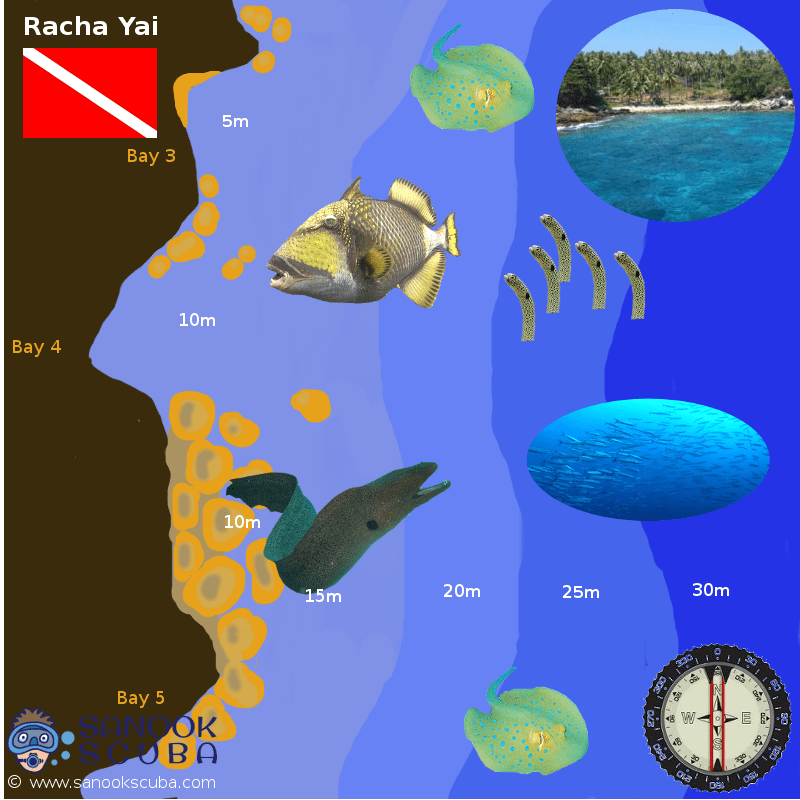 Homerun is often the last dive of the day as it’s on the north east of the island. Newbies think that’s why it’s called Homerun but seasoned Phuket divers know that it was named because of it’s deceptive current. While to the south it’s very gentle and perfect for beginner divers, if you stray a little too far north and catch the current you can be hit out of the park, with no way to fight against the current to get back to the reef.

The coral here is so so but swim slow and keep your eyes peeled and you’ll see plenty of interesting critters. 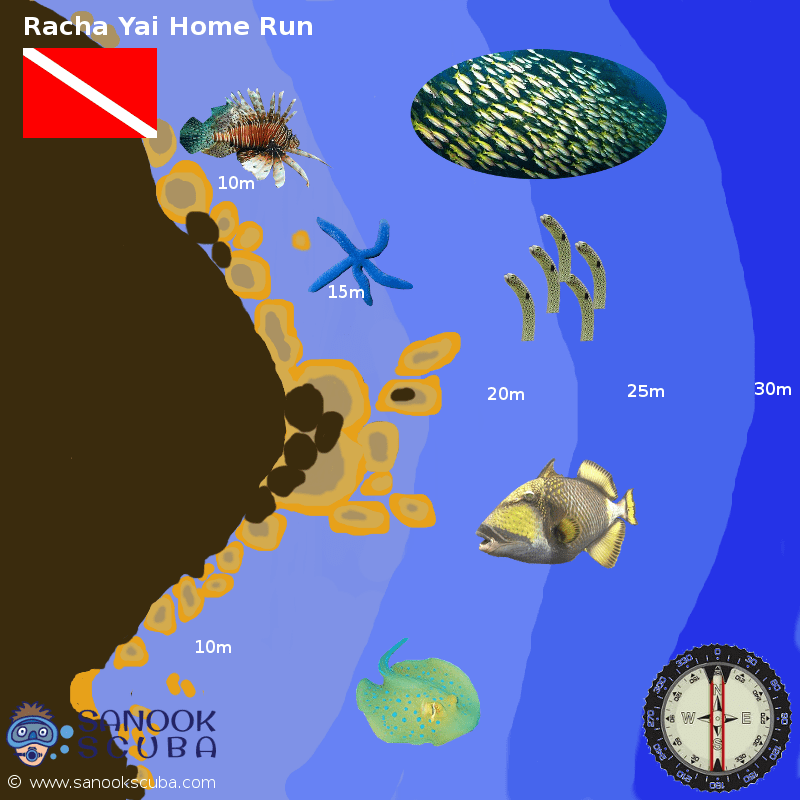 Siam Bay is at the north of Racha Yai. The rocky reefs are ok but usually only dived if conditions elsewhere on Racha Yai aren’t suitable. Siam bay is most popular for it’s underwater statues which were installed after the 2004 tsunami. There are two giant elephants and a mythical sentry (Yak) protecting a temple gate.

The statues lay in the sand at about 20 metres and from there it’s a short fin across the sand to the reef.

There are currently 4 small wrecks on the east coast of Racha Yai. An old sailboat wreck sits at 21 metres and is full of life. It’s is rapidly deteriorating, as is the wooden fishing boat wreck at 24 metres. Penetration is not possible.

The most popular wreck is the Harruby Wreck which sits in about 20 metres of water between bays 1 and 2. The top of the wreck is at about 14 metres so it’s accessible for all levels of diver. Lots of fish have made it their home including batfish, barracuda, bannerfish and snapper. Look for eels in the sand and be very careful where you place your hands as scorpionfish are lurking.